Electromechanical and electrohydraulic systems are being used more and more frequently in drive trains and chassis for functions which were previously performed purely mechanically or hydraulically. The benefits are clear: Mechatronic components not only contribute to reducing consumption and emissions but also facilitate the introduction of new functions and can contribute to high dynamics. The automotive supplier Schaeffler is presenting three innovative systems at the North American International Auto Show (NAIAS). The electromechanical camshaft phasing unit, the automatic “E-Clutch” for manual transmissions, and an electromechanical active roll control.

Mechatronic “power-on-demand” solutions use less energy compared to classical hydraulic systems. “Electromechanical systems only use power when they need it,” explains Uwe Wagner, Automotive Research and Development Manager at Schaeffler. “Using power only when it is needed leads to a noticeable reduction in fuel consumption.” By using mechatronic actuators in double clutch transmissions for example, it should be possible to make up to 90 per cent energy savings compared to a hydraulically operated control system. The “power on demand” principle works differently to hydraulic solutions which have a pressure control valve to control functionality. Not only are there losses to the control function but the hydraulic pump also has to provide the required operating pressure at all times which represents a permanent energy drain.

There are many other advantages to the electromechanical systems in addition to the efficiency gains. “With electromechanical solutions, the individual components can be designed on a modular basis using actuator technology which makes them easier to integrate and saves space at the same time,” explains Wagner. This makes it easier to incorporate new technologies such as Schaeffler’s hybrid module into different vehicle concepts.”

Schaeffler is now introducing such a system with the automatic “E-Clutch”. In this system, either an additional actuator is incorporated into the pressure line or the hydraulic connection between the pedal and the clutch release system is replaced completely, as in the “clutch-by-wire” option. Amongst other things, both variants allow the vehicle to sail which makes an effective contribution to reducing fuel consumption: If the driver removes his foot from the gas pedal while driving, the engine disengages and either switches off completely or continues running at idle which leads to two to six per cent improvements in consumption. 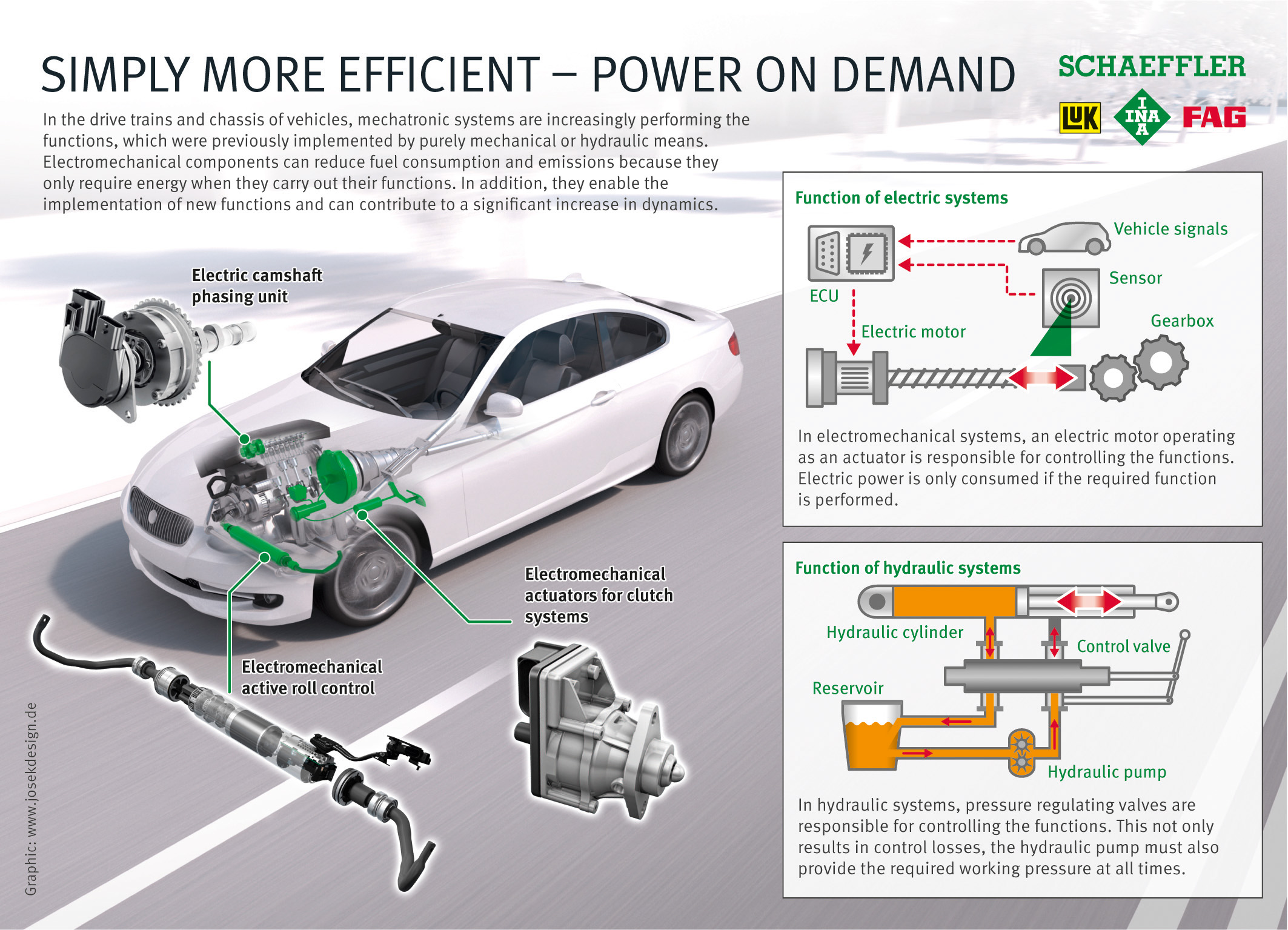 The first electromechanical camshaft phasing unit from Schaeffler put into volume production at the end of last year is a further opportunity to replace hydraulic systems. By using electromechanics, it is possible to phase the camshaft at speeds up to 600 crank angle degrees per second: Hydraulic systems operate up to two to ten times more slowly. This reduces consumption and emissions whilst simultaneously increasing comfort during stop/start operation.

Electromechanics can also lead to greater efficiency when used in the chassis: Such as the first electromechanical active roll control system in the world presented by Schaeffler in which the standard hydraulic anti-roll stabilizers currently in use are replaced by electrically driven swivel motors. This not only reduces fuel consumption but also provides greater system dynamics and more accurate steering behavior.

Throughout the development of electromechanical vehicle components, Schaeffler has benefited not only from its own systems and software expertise but also from its experience in incorporating precision components to transmit forces which the company has accumulated over many decades in the industrial arena – for example with ball screw drives and planetary screw drives. This system expertise has an important role to play in the future development of electromechanical solutions for vehicle concepts as the degree of electrification increases.