Mercedes-Benz has developed an intelligent energy management system for hybrid vehicles that assesses the road ahead and takes it into account. The objectives of the “Intelligent HYBRID”: benefiting from the freely available recuperation energy to the greatest extent possible and providing driving pleasure thanks the boost effect of the electric motor. To this end it constantly monitors the topography ahead of the vehicle. This not only works when route guidance by the navigation system is active, but also when this system is currently not in use. In developing new hybrid models Mercedes-Benz has benefited immensely from cooperating with its Formula 1 racing team. This can result in synergistic effects both for series production vehicles as well as racing cars.

Many hybrid vehicles waste energy when driving downhill. Because frequently their high-voltage battery has a too high charge at the wrong time to be able to additionally store the incidental free recuperation energy associated with driving downhill. The “Intelligent HYBRID” operating strategy, which Mercedes-Benz has employed in the S-Class since summer 2013 and now also uses in the new C-Class, ensures that the high-voltage battery is always only charged sufficiently enough to take advantage of all opportunities for recuperation provided by the route and the terrain.

In practice this means: if the battery is too full, the electric motor automatically boosts the combustion engine to discharge the battery enough to be able to fully store the expected recuperation energy. At the same time, thanks to the boost from the electric motor the vehicle uses less fuel and thus produces fewer emissions during this phase.

The system uses data from the COMAND Online navigation system to calculate the recuperation potential of the road ahead. For example, the data provides forward-looking information about the route profile and speed limits in a one-meter grid for up to seven kilometers in advance.

This information is processed by the Central Powertrain Controller (CPC), which then initiates the anticipatory measures. It not only lowers the battery charge in line with the situation before a downhill stretch by expanding the all-electric or boost periods, but also controls the potentially necessary recharging of the battery by the combustion engine with foresight in order to benefit from the most favorable battery state of charge. Further adaptive control algorithms additionally take the current vehicle weight, the driving behavior (including vehicle speed and braking behavior) and the load of the ancillary consumers into account for predicting the recuperation potential. 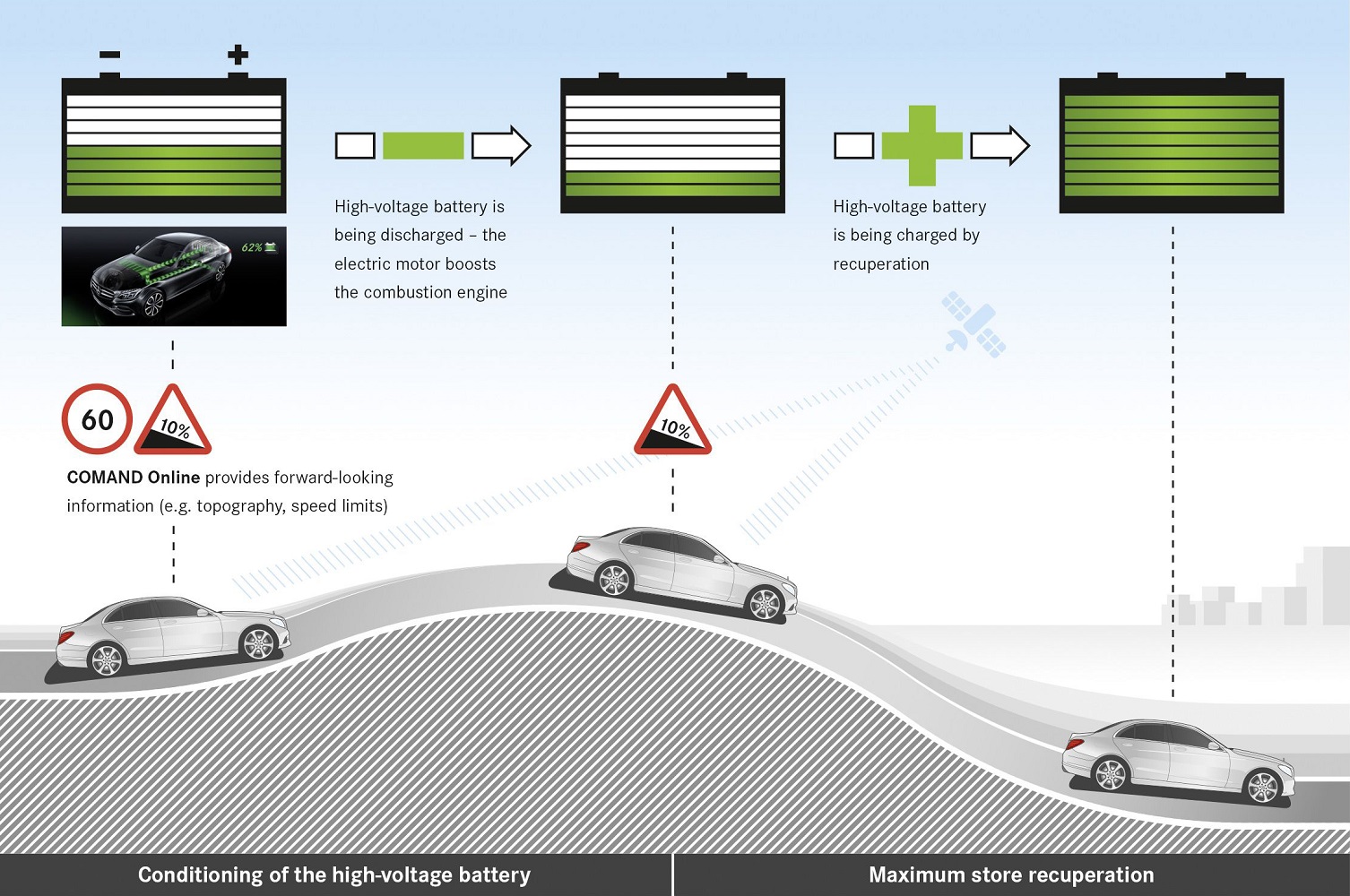 As mentioned earlier, “Intelligent HYBRID” also functions when route guidance is inactive. In this case the system calculates the probability of the driver making a turn dependent on the category of the road. For example, if the hybrid vehicle is travelling on a motorway, it assumes that the vehicle will probably continue on the motorway for the next seven kilometers.

“Intelligent HYBRID” keeps the driver informed about an upcoming elevated recuperation potential by highlighting the road ahead of the vehicle in green on the energy flow display.

How much fuel is being saved depends on the topography. The more mountains there are, the higher the fuel savings will be. That is why the effect will be more noticeable in the mountains than on plains.