When the totally redesigned 2016 Nissan Maxima takes the stage this week at the New York International Auto Show, one of its smallest details is a little amber coffee cup symbol that may appear in the center of the instrument panel.

The cup is part of the visual and audible warning provided by Nissan’s new Driver Attention Alert (DAA) system, which is designed to help detect drowsy and inattentive driving. DAA will be available on the 2016 Maxima as part of a comprehensive suite of safety and driving aids, and is available now on the new 2015 Murano crossover. The debut of the new DAA-enabled Maxima is just in time for “Drowsy Driving Awareness Day” on April 6.

According to a November 2014 study by the AAA* (formerly the American Automobile Association), 37 percent of drivers report having fallen asleep while driving at some point in their lives, with 11 percent having done so in the past year. Results of the survey suggest that drowsy drivers are also involved in approximately 300,000 crashes each year, 6,400 of them fatal. Driver fatigue and inattention also pose safety concerns, which the Driver Attention Alert system is intended to address. 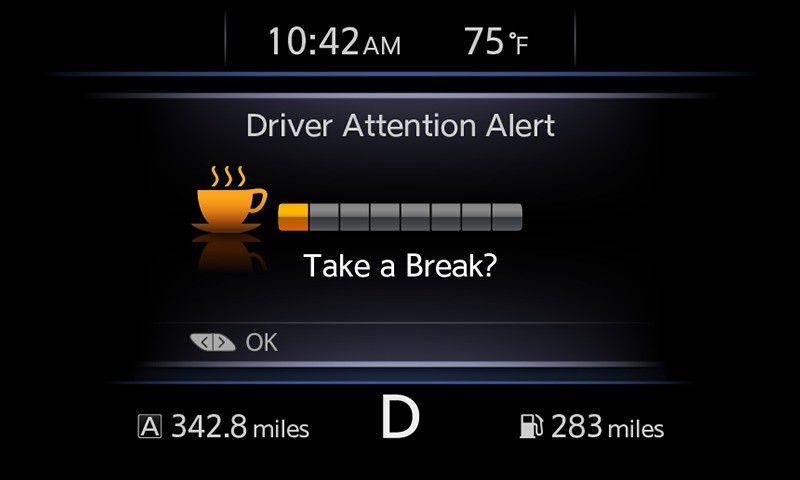 If it detects driving behavior consistent with a drowsy driver, the system uses an audible chime sound and displays the amber coffee cup with a message reading, “Take a break?” in the vehicle’s information display. The DAA includes logic to help address false detection, road curvatures, lane changes, braking and even poor road conditions. The system automatically resets when the engine is turned off. It can also be turned off by the driver if desired.

It is the driver’s responsibility to remain alert at all times. DAA is only a warning to inform the driver of a potential lack of driver attention or drowsiness. It does not detect and provide an alert in every situation.

The all-new 2016 Nissan Maxima is expected to go on sale in summer 2015 in the mid-size sedan segment.